Bitcoin price below $ 10,000 caused open positions to decline by $ 653 million, the largest since March


The open interest in Bitcoin (BTC) futures just had its largest daily reduction in five months. Yesterday’s 11% drop resulted in more liquidations than on May 9, when BTC fell 12.5% ​​to $ 8,600.

The skew data shows that open positions have decreased by a total of $ 653 million, reaching $ 4 billion on September 3. This number includes perpetual (inverse swaps) and futures with a fixed expiration on the exchanges OKEx, CME, Binance and the remaining derivatives.

Yesterday’s move marked the biggest daily drop since the horrific cascading liquidation of $ 1 billion on March 13, which resulted in a 50% drop in Bitcoin price. The same day saw the Dow Jones Industrial Average’s worst sell-off since 1987, down 10%.

The iPhone maker is currently valued at just over $ 2 trillion. Such an impressive figure could take over the entire altcoin market, paying a 1.300% premium on the current altcoin market cap of $ 140 billion.

The futures markets tend to trade at a slight premium over regular spot exchanges. This is not exclusively the case in cryptocurrency markets, but rather a derivatives effect. By postponing financial settlement for a trade, sellers typically charge more money.

This premium indicator for futures contracts is called the base and is typically between 5% and 15% on an annual basis. Whenever the premium is positive, the market is characterized as in contango. On the other hand, a premium of zero to negative futures contracts is unusual and indicates a bearish sentiment. 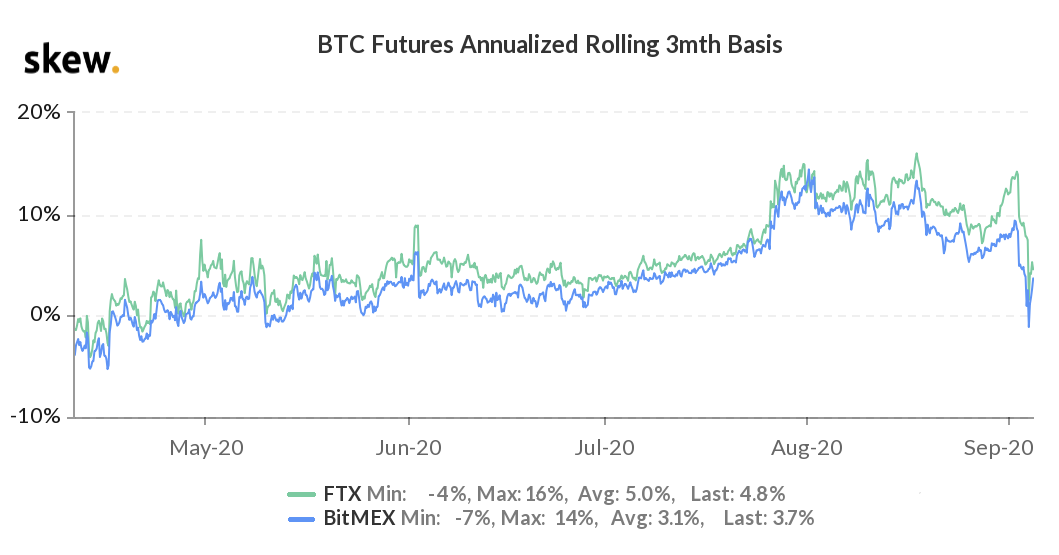 The graph above shows how significant yesterday’s brief drop below $ 10,000 was in the futures markets. Such a negative premium situation, known as backwardation, was last observed four months ago on May 10th. At that time, Bitcoin (BTC) recovered quickly in the following three days and the base indicator gained positive territory again.

The current annualized base of 4% cannot be considered bearish, although it is clearly not bullish like the 10% level it was three days ago.

Short-term options are back at bearish levels

Bitcoin options markets are also prone to significant price changes. Similar to the futures market, the recent BTC drop caused significant moves in risk aversion. Market makers often increase spreads during periods of volatility. What happens the next day is therefore the most telling.

The 25% delta skew indicator compares similar call (buy) and put (sell) options side by side. The indicator becomes negative if the put option premium is higher than the call options with a similar risk. Such a negative offset results in a higher cost for the downward protection, which indicates an upward movement.

The opposite is true when market makers are bearish and the 25% delta skew indicator is gaining positive ground. 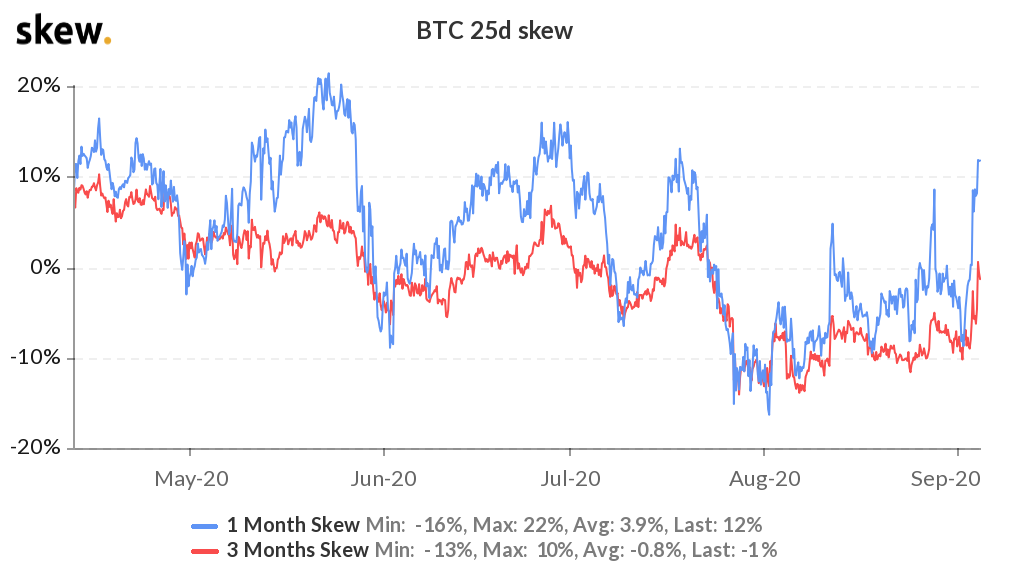 Although the numbers vary depending on the expiration of these options, the short-term usually have greater impact. Bitcoin’s (BTC) sharp decline yesterday caused the 1-month delta offset to rise from 25% to over 10%. As the graph above shows, ranges from -10% (slightly bullish) to + 10% (slightly bearish) are common.

It seems premature to conclude that sentiment in options markets is bearish, especially when analyzing longer-term options. Still, large traders and market makers appear to be risk averse right now, at least when it comes to pricing downside protection options.

Despite the decline in open interest in Bitcoin futures, the face value of $ 4 billion remains higher than it was two or three months ago. The same applies to the current futures premium of 4% (basis), which is far from a declining backwardation level.

One should keep in mind that the cryptocurrency markets are incredibly volatile and negative price fluctuations also affect investors. No further evidence is needed after the two biggest liquidation events for BTC futures, which happen on the exact same day of the historic stock market crashes.

These events prove that even uncorrelated markets, regardless of their different drivers, may have peaks and valleys at similar times. The current global macroeconomic scenario appears to be the dominant force for risk assets, including Bitcoin.

The views and opinions expressed are those of the author only and do not necessarily reflect the views of Cointelegraph. Every investment and trading step is associated with risks. You should do your own research when making a decision.

Ethereum [ETH]: Learn this earlier than you determine to money in on that FOMO